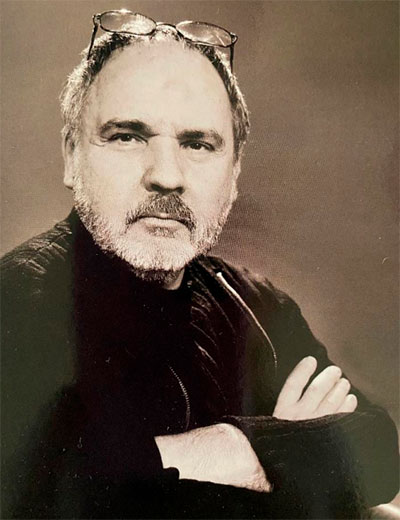 Yuriy’s biography is astonishing. His grandfather served on the ship "Askold" during the Tsar's reign, after which he named his son, the father of Yuriy Askoldovich. Yuriy himself supported the family tradition and became a sailor where he saw different countries during a time when most of the citizens of the USSR were not allowed to travel abroad. Yuriy visited every continent except Antarctica discovering the diversity of the world. Perhaps it was this unusual experience that brought Yuriy Askoldovich to the philosophy faculty of St. Petersburg University. Later, he completed his postgraduate studies, received his Ph.D., and then his Doctor of Philosophy degree. Yuriy Sandulov taught at the university before leaving for the United States where he was the chief editor of the scientific publishing house called "Lan". For many years, before retirement, he worked on the Russian-language TV channel RTVI.

In New York, Yuriy Sandulov founded and headed the historical and cultural society Northern Cross, devoting his life to the study and preservation of the heritage of the Russian emigration. In 2017, the Moscow Government awarded Yuriy Sandulov with a medal for his services in preserving the cultural heritage of Russia, "In memory of the 700th anniversary of the birth of Sergius of Radonezh."

Thanks to Yuriy Sandulov, hundreds of private archives from the first and second waves of Russian emigration were collected and preserved. Dozens of unique manuscripts were restored and published, including those on the history of the Russian Church abroad. The heritage of several generations of emigrant artists has also been collected and preserved. With his efforts, monuments to outstanding figures of church and culture were erected and several series of postcards on the history and culture of emigration were prepared and issued including, Awards of the White Armies and Governments, Artists of the Russian Diaspora, etc. Among others, books on the history of Russia Abroad and ROCOR have been organized and published such as, Russian Burial Sites in the USA and Russian Necropolis in Mahopac. In addition, as an excellent photographer, he photographed and collected a unique portrait gallery of contemporary Russian-speaking emigrants to the United States. The portraits were then compiled by New Review Magazine, for whom Yuriy collaborated with for many years, into the album Waves of Russian Emigration in the USA.

Yuriy’s passing is an immeasurable loss for the entire Russian-speaking community in the United States and for his family and friends. Yuriy was a loving husband, caring father, sensitive, loyal friend and wonderful teacher to his grandchildren. He had many plans yet to be fulfilled. Today, there is hardly anyone with his level of enthusiasm and selflessness, nor his openness to the world and willingness to work in the field of preserving the cultural heritage of Russian emigration.

Yuriy Askoldovich Sandulov died on May 6th, on the Day of the Holy Great Martyr George, and was buried in the Russian cemetery of the Novo-Diveevo Convent in the state of New York.